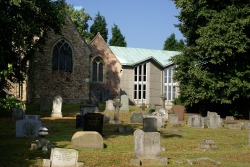 Birstall church has a long history. The present building dates from the Early English period but it is probable that a church has stood on the site since Saxon days. Relics of a Saxon window were found during major restoration works in 1869. These have been carefully preserved and can be seen in the north wall of the chancel in the older part of the building.

The West Tower is built of ironstone and dates from the thirteenth century. It contains a peal of eight bells. At one time the tower was surmounted by a steeple but this was so badly damaged by lightning in 1823 that it was removed.

The Chancel in the old part of the building dates from the thirteenth century but has undergone many restorations. The shape of the windows in the chancel, suggest that they may be pre C13th. In 1869 restoration works under the direction of Sir Charles Gilbert Scott were carried out. These works involved the remodeling of the sanctuary and chancel together with an extension to the nave. The sanctuary still contains an ancient piscina on the south wall and an aumbry cupboard without door on its north wall. A piece of ancient Saxon stonework depicting an heraldic beast, which was formerly in the north east jamb of the arch leading to the sanctuary, was placed in the south wall of the nave following the major extensions to the church in 1962. The circular font, thought by many to be pre-Norman which formerly stood near the entrance to the church has now been moved to the west side of the modern nave. It has a fine modern cover. There is also a striking modern window. Both these were given in memory of former parishioners.

The C19th stained glass showing St James, the patron saint of the church, in the north and south sides of the sanctuary in the old part of the church is of particular interest as is the small window in the tower. There are also two attractive windows, one in the south wall of the chancel , the other in the Howard Room, by Theodora Salusbury. Her signature is the peacock which appears in each window. She has worked in several Leicestershire churches.

Until the end of the nineteenth century Birstall was just a small village on the outskirts of Leicester and the parish was under the supervision of the Vicar of Belgrave. However, with the coming of the railway in the 1890’s and the development of bus services at the end of the First World War, it became a popular commuter village and there was a big expansion of house building on both sides of the A6. In 1926 Birstall became an ecclesiastical parish in its own right.

The development of Birstall after 1918 meant that the church building was not large enough to serve the growing population. By 1937 the population of Birstall had grown to 6,000 and there was a consequent rise in church attendance. In order to accommodate the increased numbers an appeal was launched for £12,500 to finance an extension to the church. It was proposed to build a new nave and chancel in the Gothic style so that both the new and old parts of the blinding would blend together. However, the outbreak of the Second World War brought a halt to these plans.

In the 1950's.when it was possible to start thinking about church extensions again, the cost of building in stone in the Gothic style was considered to be too expensive. An extension using modern materials was designed by Mr. S Penn Smith with a new nave running from north to south at right angles to the original church building. The extension was completed in 1963 at a cost of £45,000 and as a result seating in the church was increased from 170 to 500. The new nave and vestries are linked to the old church and the result forms what many consider, a pleasant blend of the old and new in church architecture.In 2007 the latest stage of architectural development took place, with the installation of a glass screen between the old and new church, and the re-working of the entrance porch – to create a new community area (alongside the chancel and bell-tower) in the old Church.

There are several interesting monuments in the old church. In the chancel of the old church there are fine memorials to John Mansfield and to Sarah, his first wife, dating from the early C19th. John Mansfield was a great benefactor of the village. He lived at Birstall Hall for 38 years, was Mayor of Leicester and MP for Leicester.

There is also a memorial to Richard Stephens, a C19th vicar, to whom the East window is dedicated and several slate memorials to members of the While Family set into the chancel floor. In the nave of the old church there are also interesting memorials and brasses.